Recognizing the many individuals from the Township of Zorra Ontario, who have served our country from the 1860’s to the present day.

The Heroes of Zorra web site committee was saddened to hear about the recent passing of Dame Vera Lynn at the age of 103.   Dame Vera Lynn, the endearingly popular "Forces' Sweetheart" who serenaded British troops abroad during the Second World War got crowds singing, smiling and crying with sentimental favourites such as We'll Meet Again, and The White Cliffs of Dover.  May you rest in peace Dame Lynn

CRASH SITE THAT TOOK THE LIVES OF 20 CANADIANS COMMEMORATED ON SEPT. 25, 2021

For those who follow the news regarding the military and the roles Canadians had during both World Wars, you recall a news item from the Fall of 2018. It was about a plane crash over Germany during WW 11 with 20 Canadians being on board plus 3 staff, and all were killed. James Ernest Allen from East Nissouri township was one of those Canadians killed.

Under the leadership of Eric Wieman, who works with the IG Heimatforschung Rheinland-Pfalz/Historical Research Community in Germany. the site of that crash was located in 2017. The area was meticulously searched. Pieces of plastic windows, tire fragments and small pieces of aluminum – some still with camouflage paint were just a few of the items recovered.

The group worked on establishing a permanent monument right where the plan crashed down. They were also able to contact descendants of those fallen Canadians. This is when the Heroes Of Zorra were called upon. See earlier write-up for the Thamesford Village Voice published in December 2018 and now available on the HOZ web site...

Due to the world-wide Covid 19 pandemic the scheduled event to commemorate the monument and the 23 men who lost their lives had to be re-scheduled three times. Finally on September 25, 2021 the long-awaited event was held. Thank you to the kindness of Mr. Wieman the Heroes Of Zorra have been given permission to share with you a couple of links, posted on our web site, that will allow you to view the ceremony in German and also a shorter version that was provided in English. We hope you enjoy this little part of history brought closer to home.

For an unnarrated video of the ceremony click here https://youtu.be/QRig4t9pBKE

CRASH SITE OF DAKOTA KG653 LOCATED IN GERMANY...AND ITS CONNECTION TO TOWNSHIP OF ZORRA

In November of 2017 a researcher in Germany found the site of a Second World War plane crash that killed 20 Canadians. Erik Wieman was researching the Canadian crew of another crash site in his village of Neuleiningen in Rhineland-Palatinate, when he took on his biggest investigation yet -- the Sept. 24, 1944 crash of a C-47 Dakota KG653 aircraft carrying 23 passengers. All were killed. It was among 15 Dakotas en route from England to Italy and ultimately to India to deliver troops building two new squadrons to help in the fight against Japan. One of those killed in this crash was James Ernest Allen of the former East Nissouri area.

The aircraft’s journey was plagued by bad weather and navigational issues, which pushed it off course over Germany where it was shot down from the ground in broad daylight. Bullets hit the wing of the plane, which broke off as the aircraft plummeted towards the ground. The gunman, a fighter pilot named Julius Meimberg, later wrote that he only intended to ground the plane.

Erik Wieman considers it a personal mission to locate downed wartime planes, spending hours combing through records and databases. He has co-founded a crash site research group and works to find the relatives of crash victims and memorialize the locations of their deaths. Wieman, a Dutch native whose grandfather fought the Nazis but who married a German woman and moved to Germany in 1992, worked with a local newspaper to find witnesses to the crash. He was shocked when 15 people, all in their 80s and 90s, came forward and offered to help. Decades after the crash, searchers combing an open field last November were able to find pieces of plastic windows, tire fragments and small pieces of aluminum – some still with camouflage paint.

In March of 2018 Colleen Carmichael (a Canadian who was assisting Mr. Wieman in his search for family members of the victims of this crash) contacted the Heroes of Zorra web site requesting our assistance as she had found the HOZ site and noted that there was a James Ernest Allen on the site along with his father and brother. After contacting two of my HOZ colleagues, Joyce Day and John Milner, and determining that they had no further information on Mr. Allen, I thought of my friend Ruth Rout and contacted her. Ruth remembered the Allen family. Not only did she remember them, but that they also had a sister. Ruth was able to give me the name of a niece of Mr. Allen’s, and that she currently resides in St. Marys. I contacted her and yes, it is the right family. As well she was able to give me the name of another niece who now lives in the Toronto area. It was wonderful to speak with these two ladies...to hear their excitement about this discovery, and hopefully for them to learn a little bit more about this relative that they only heard their parents speak about. Mr. Wieman and his team have been in touch with the two ladies. A dedication service of a memorial to these servicemen is planned for 2020.

James was the son of Ernest John and Marion (nee Baldwin) Allen.  He enlisted in the Royal Canadian Air Force at the age of 18 in 1941 and went overseas in 1943. His parents had lived at Lot 31 Concession 13 of the former East Nissouri Township and he had worked for Thomas Leadman of Browns Corners.  When he enlisted he stated he was a painter.

The Heroes of Zorra is pleased to be able to share with you the history of the Zorra Caledonian Society from 1937 – 2017.

Our appreciation is extended to the Society.

DUTCH-CANADIAN FRIENDSHIP TULIP GARDEN TO BE PLANTED IN ZORRA

On Wednesday, October 28th, 2015 at 10 a.m. a public ceremony will be held at the cenotaph in front of the Township of Zorra office.  Through a grant program the Township was recently the recipient of 500 tulip bulbs.  This grant is made possible due to the generous partnership of Canadian Garden Council, Vesey's Bulbs, Canada Post, Canadian Tulip Festival, National Capital Commission, Canadian Nursery Landscape Association, Garden Making Magazine, Chimpanzee, Baxter Travel Media, Enterprise Canada, Gardens BC, Quebec Gardens' Association and the Ontario Garden Tourism Coalition.  The Dutch-Canadian Friendship Tulip Garden will be planted at the cenotaph which is in front of the Zorra Township Office.  You are invited to join in on this event on October 28th at 10 a.m. when the bulbs will all be planted.  A presentation will be given on "the garden", followed with coffee and cookies.  You are most welcome to attend this public event, and if you have a friend or family member who is a veteran, please bring them along with you.  A colourful reminder of the sacrifices Canadians and our own Heroes of Zorra have given over the years.

One of Zorra's heroes, Nursing Sister Elsie Gertrude Ross will be the topic of discussion on Monday, November 10, 2014 when CBC Ontario Morning (93.5 FM)interviews HOZ committee chair Shirley McCall Hanlon at 6:40 a.m.  With true care and compassion this young woman cared for many of our wounded soldiers who were returned home.  She was the first woman to be given a full military funeral.  She was held in such high esteem by her patients and colleagues that the procession following her casket lined the streets of Toronto with many wounded soldiers hobbling along behind.  Tune in to hear this interesting story.

The Royal Canadian Legion (Ontario) is in the midst of publishing a new book called Military Service Recognition Book. Ontario is asking for families of servicepersons to submit the name, information, brief story and possibly a picture of the individual Veteran/Serviceperson.  Please note that due to liability issues they cannot take the information off of our web site or the History Books.  Forms to submit may be obtained on-line at the Royal Canadian Legion - Ontario web site or you may also obtain from your local Legion Branch.  Forms are to be completed and returned to the local branch.  Contact your local Legion if you have any questions or concerns.  This needs to be done asap as the printing is to be done in September 2014.

WORLD WAR I - A LETTER HOME TO WEST ZORRA

How are you getting along.  Have not heard from you for some time.  Whats the matter are you too busy to write or are the girls too many for you.  I heard from more than one that you were getting to be a wild fellow.

MY SERVICE IN THE KOREAN CONFLICT

This morning I have been asked to relate to you some of my experiences in the Royal Canadian Army Medical Corps – not the whole 25 years!  I thought I would tell you of my year tour of duty in the Far East during the Korean conflict.

STUDENTS AT ZHPPS STEP UP TO THE STAGE

For all of those who attended the Remembrance Day Service at Zorra Highland Park Public School on November 11th, 2013 it was a service that will long be remembered.  Parents, grandparents, teachers and visitors could not

On Sunday, November 3, 2013 approximately 35 individuals gathered at Dickson's Corners for the annual Ceremony of Remembrance.  It was especially impressive to have young people present.  Following the indoor service everyone proceeded to the Cenotaph for the laying of the wreaths. Attached is a picture of the Color Party marching to the Cenotaph.  Guests were all invited back to the Beachville Legion for a time of fellowship.  INDEED WE REMEMBER.

Former Military Serviceman A Hero On Another Front

Former Military Serviceman A Hero On Another Front

John Allan McKay who grew up at Lot 14, Concession 7 of West Zorra Township and served in the Royal Canadian Corps of Signals from 1960 to 1965 was also hailed as a hero in August of 1977.

written by Shirley McCall Hanlon with credit to the Stratford Gazette, November 2005

Elsie Gertrude Ross (born June 22, 1882) was born in the Township of West Zorra, daughter of Alexander and Christina (nee Murray) Ross. 1891 Census records show the family still living in West Zorra, however in the 1901 Census the family is shown to be now farming at Lot 37 Concession 3 of North Easthope in the County of Perth. 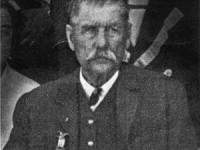 Most Canadians, and indeed all North Americans have probably never heard of the little hamlet called Youngsville in what was then called Canada West (Ontario).  Located in the Township of Zorra, within Oxford County this community was settled by strong, community-minded United Empire Loyalists and ancestors to many who are honoured to join with you today.

Memories Of The Great War

When I returned from Alberta, in October, 1915, students were enlisting daily. We were pressed to enlist. “Why aren’t you in uniform.” asked a stern-faced maiden lady. The lad replied. “For the same reason that you are still single -physically unfit.” Looking back, there was an element of selfishness in enlisting. It was the popular thing to do.