Memories Of The Great War 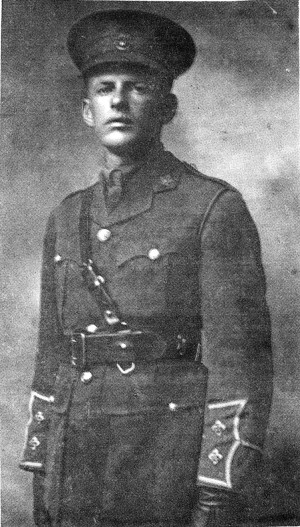 When I returned from Alberta, in October, 1915, students were enlisting daily. We were pressed to enlist. “Why aren’t you in uniform.” asked a stern-faced maiden lady. The lad replied. “For the same reason that you are still single -physically unfit.” Looking back, there was an element of selfishness in enlisting. It was the popular thing to do.

Looking back, there was an element of selfishness in enlisting. It was the popular thing to do. We failed to realize that it was a hardship for our parents. “They also serve who only stand and wait.” We were not in danger all the time, by any means, but they worried continually. Our unit left in a hurry and I had only a day and a night to say, ‘Good-bye,’ before proceeding overseas. It was the first time I ever saw my father shed a tear; mother remained passive and tearless but was never the same again. My fiancée had a premonition that we would never meet again and proceeded immediately to train as a nurse in Wingham Hospital.

“The noblest battles that ever were fought –

Shall I tell you where and when?

On the maps of the world you’ll find them not:

They were fought by the mothers of men.”

On December 15th, 1915, the original Third Division sailed on the ‘Misanabie” arriving in Plymouth on December 28. It was a very disagreeable voyage in a comparatively small vessel. We were lectured daily and heard the ‘purely fictitious’ tale of the Canadian who was crucified by the Germans. They assured us that the only good Germans were dead ones.

After a few weeks’ training in Witley and Bramshott Camps, we went to Belgium on February 21, 1916. While at Bramshott we saw the old black-smith shop at Liphook which was the inspiration of the poem, ‘The Village Blacksmith’. We landed at LaHavre and our first night in France will long be remembered. Although the ground was covered with snow we slept in tents. My feet were so wet that I wrung water out of my socks and had to put them right on again. Our baggage had gone on ahead. It was there I saw the first military cemetery. There were long, long rows of crosses upon each of which was printed ‘R. I. P.’ As I was trying to translate the latin words, someone behind me said, ‘ Rise if possible. ’That was so typical of army life – an unfailing sense of humour.  A Canadian asked an Englishman, ‘Is it true that two shells never burst in the same place?’ ‘Perfectly, true, my son,’ he replied, ‘once a shell bursts the same place ain’t there.’

From LaHavre, we proceeded to Poperinge in Belgium in freight cars, labeled. ‘Eight horses or thirty-three men.’ It was so crowded that we had to lie with every other one the opposite way. The first night I slept in a straw-mow and in the morning was cheered to see a Massey Harris binder. Space will not permit a detailed account of the next 43 months but there were few dull moments. Until May, 1917, I remained with the Army Service Corps. Our task was drawing provisions from the rail-head to the battalion head-quarters by means of horses and wagons. We had a most disagreeable and over-bearing Sergeant Major. An English corporal described him thus, ‘E’s never ‘appy except when’E’s miserable.’  The last I heard of Sergeant Major Murray he was serving time in Kingston Penitentiary for some misdemeanor in the Royal Mint.

Rural France looked much like our Western prairies. Their typical farms averaged 40 acres and had no fences or buildings. The women herded the cows, which were tied together, in the pasture lots. They lived in villages, in quadrangles, the houses at the back and barns and shed completing the square. The gate at the front could be locked. In the centre was the manure heap – also the well. It was against the law to drink water, unless it was boiled. Every soldier carried his own water-bottle. On one occasion, when the Orderly Officer asked the Corporal about the water, he replied, ‘We biles it and chlorinates it, we all drink beer’. Rural homes were very plain with earthen floors; no musical instruments or reading matter and all wore wooden shoes. They were very friendly and kindly folk and invariably offered a cup of coffee – no milk or sugar.

Being in a smaller unit, we had no chaplain. We usually had a free time on Sunday afternoon and our Captain, a Roman Catholic, gave grudging consent to our having our own. I discovered a very fine friend, George Wakelin, who was a trained singer, and mother sent me a sheaf of old sermon notes and we were soon in business. As high as 40 attended. One day Tom Shearer, a nice clear-cut young chap, apologized for having hidden his colours. He had been a Sunday School teacher. He was a real help until he was killed, a few weeks later. I wrote his mother in Glasgow. Incidentally, after our return in 1919, George Wakelin rang me to tell me he was enrolled in Trinity College in Toronto. He was later ordained and the last I heard had become a Canon.

Herb Cobb, a college friend, and I enlisted and went overseas together and were in the same unit, until May 1917. Being University students we were permitted to apply for commissions. We were sent back to England for training at the ‘Officer’s Training Corps’ at Bexhill. We thoroughly enjoyed a few months in the old Country. We were surprised when the English people asked us why May 24 was a Canadian holiday. Both in England and Scotland the Canadians were well used. They realized that ‘going-on-leave’ was not ‘going home’ for us. One night I remarked to an English soldier how much we appreciated their hospitality. He said, ‘I hope you Canadians will remember that when Englishmen go to Canada after this’. I realized we well deserved the implied rebuke but he came back later and apologized. Typically English manners!

In September, 1917, I was attached to the 78th Battalion, which originated in Winnipeg and was called the ‘Winnipeg Grenadiers.”  We arrived just before Passchendale, which was a horrible, muddy affair and it will always be questionable if the heavy losses sustained were in any way justifiable. On arrival, the fellow I was with was sent up the line and killed next morning. I was sent back to arrange billets which was fortunate for me.

During the first three years, trench warfare played a great role. By the fall of 1917 a system was established which was much less monotonous. At first the front lines had been so close that there was continual ‘sniping.’ Gradually, they drew back and ‘No Man’s Land’ was from a quarter to a half mile across. Barbed wire entanglements were built and there were walking patrols at night. The days of sniping were over.

By 1917, a 32 day system was established with four eight-day periods, - The FRONT LINE, in which we remained fully dressed, day and night. From a half hour before dawn until a half hour after dawn we were on the ‘alert.’ REST PERIOD, away back of the front line for baths and change of clothing and having our blankets deloused. SUPPORT, where we slept all day and went on carrying parties at night, also repairing barbwire entanglements. CLOSE SUPPORT, was immediately behind the front line and from there we moved forward to the front line.

On July 23, 1918, while on a working-party in ‘No Man’s Land’ we were blinded with mustard gas. During my two weeks in a ‘Dressing Station.’ I was very fortunate in finding Percy Jeffrey, a former Albert College friend, a druggist, who gave me wonderful attention while my eyes were bound up.

By 1918 it had become apparent that the war would never be won in trench fighting and it was affecting the morale of the troops. Extensive plans, involving extensive training, resulted for the final push. Then, it came, through Cambrai, Valenciennes, to Mons- November 11th, 1918. The Germans made an orderly retreat from Mons, early in the morning, and the allied troops entered in the evening. There was not a single shot. By noon, next day, we were in Mons and it was a wonderful experience. There was no place on earth I would rather have been! I had to buy a chair to stand on to see the procession. The king of Belgium, the Prince of Wales, they were all there. It was too good to believe.

Many of us left, almost immediately, for leave in Britain. During our absence, our unit moved to Germany as part of the ‘Army of Occupation.’ On December 5, I rejoined my unit in Bonn and was handed a bag of mail which contained 22 letters of sympathy. My fiancée had died with ‘Influenza’ in Wingham Hospital on October 24. While in England I had sent my Christmas gift. It was a staggering and untimely blow.

Just at the close of the war, I was posted to the Third Division, Ninth Brigade, as a Y.M.C.A. officer. We had Christmas at Seigburg Muldorff, 24 miles east of Bonn on the Rhine River. I still have most pleasant memories of the friendliness of the German family where I was billeted. When we asked the young lad to play his violin his first number was ‘God Save the Queen’ in my honour. The night before Christmas I packed a box of candy for eight year old Gretchen and her mother told me it was the first for four years. Our task in the Y’M.C.A. was providing entertainment for the troops who were impatient to go home.  The “Dumbells’ and ‘Y. Emmas’ were very popular and talent was sent over from England.  It was our task to arrange billets, itineraries and transportation. I especially enjoyed escorting the famous bishop I. Stringer of the Yukon. I joshed him a bit about an ‘Anglican Bishop’ receiving his orders from a Methodist student.

Time went by, all too slow, until our return to Canada in Sept. 1919. We came home on the SS Columbia with 200 Canadian officers and 90 nurses.  It was like a family party. It was just time to enter the fall term at College and become readjusted to civilian life. My military life was over.