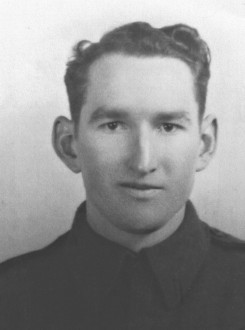 Allan Major Garner was born when his parents Francis William (Frank) and Fannie (nee Major) Garner lived on Lot 4, Concession 5 of West Zorra Township.  He served during WW ll in the Royal Canadian Army Medical Corp, 5th Field Ambullance in Italy and Sicily. He was discharged October 12, 1944 by reason of return to civil life (on compassionate grounds).  His dad Frank Garner requested he be discharged from service and returned home to help with the family farm. He contacted Hepatitis B while overseas due to his exposure to so many injured soldiers and the environment in which he was working.  He returned to Canada the fall of 1944 by ship attending to the wounded soldiers being sent home.

After the war, he married Betty Stevens in 1947 and they lived in Woodstock, where he worked at the Ontario Hospital.  Allan and Betty had four children - Marie, Bruce, Jeanne and Mark.