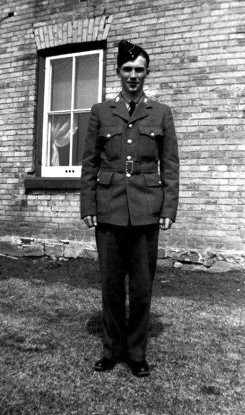 Ephraim Rout was born at Lot 27, Concession 2 of West Zorra Township.  He was the son of Ephraim and Mapel (nee Clark) Rout and attended Harrington Public School and Harrington Continuation School.  As a teenager he worked on a farm for Ab McCorquodale.  He went to Beale Technical School in London and then worked at Kroehler Manufacturing in Stratford befor enlisting.   He served with the 1st Canadian Army from 1939 until he was discharged on April 5, 1946. Eph did advanced training at Ipperwash followed by six months in Montreal for army administration. He was with the Canadian Military Headquarters when he left Halifax in February 1943 on the 'Louis Pasteur' for England. As soon as the beach head was established the men were posted to operational headquarters in Europe. Eph served both in Germany and Belgium. Following the war, he served with the Occupational Forces and returned on the Queen Mary which sailed into New York in April 1946. On September 24, 1949 he married Ruth Gregory of R.R. #2 Lakeside and together they raised a daughter Mary Jane at NW1/4 Lot 30 Concession 10 of East Nissouri Township. In 2004, they travelled to California and slept overnight on the Queen Mary. What a way to celebrate his 80th birthday!