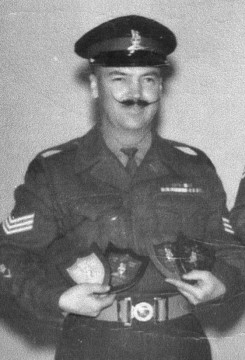 Donald A. Olson Senior (born February 21, 1927) lived on Lots 24 and 29, Concession 7, West Zorra. On March 14, 1945, in Calgary, he enlisted with the Canadian Army. Three days later he was sent to Camp Borden (Ontario) for recruit training with A-11 Machine Gun Regiment. His pay was $1.30 a day. Having qualified as a gunner, and about to get further training, the war was over.  He was sent back to Calgary for release, but chose instead to remain in the military.  He was posted to #44 Coy, Canadian Provost Corps as he also had the qualifications of typing and shorthand.  In October 1946 he joined the permanent force and was posted to Army Headquarters in Ottawa as a clerk administrator. In 1950 he was assigned to the Military Police School at Camp Borden, but in April of that year, after some preparation training at Fort Lewis, Washington, he was shipped to Korea where he remained until May 1951. Donald also spent a year in Egypt and 3 years in Germany.  He remained with the Canadian Forces until retirement on March 15, 1970, having served 25 consecutive years..