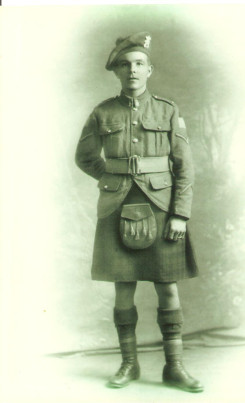 George Frederick Flack was born in Streatham, England on August 15th, 1893 to parents Frederick and Julia (nee Arnold) Flack. He immigrated to Canada in 1911 together with his older brother and they settled in Zorra Township. His parents and 2 other siblings followed them to Canada shortly thereafter.

October 30th. 1915 George Frederick Flack enlisted with the 71st Battalion of the Black Watch (Royal Canadian Highlander Regiment) at Ingersoll Ontario. As a unit of the Canadian Expeditionary Force the battalion embarked for Great Britain on April 1st, 1916, leaving Halifax on H.M. J “Olympia”. They arrived in Liverpool on April 11th and by June 1916 he was in France and had been transferred to the 42nd battalion.

He saw battle in Ypres, Sloshel, Somme, Vimy, Passchendaele, Amiens and Mons. The 42nd battalion entered Mons the day the Armistice was signed on November 11, 1918. The men of the Black Watch fought those muddy and bloody battles in the kilt.

The 42nd battalion fought in the Battle of Vimy Ridge. It was during this battle that George Flack received a commendation from the Commanding Officer. A copy of this letter of commendation was secured in a small bible that George kept in the left breast pocket of his uniform throughout the war. The commendation is as follows:

On April 9th, 1917 during the attack on Vimy ridge this soldier, a Battalion Runner, made repeated tours to the Front Line under heavy shell fire and was untiring in his efforts in getting messages and guiding up parties. After an exhausting day, on the early morning 9th/10th April when we were short of Runners he volunteered and led up under fire a stretcher bearer party to the final objective on Vimy Ridge and succeeded in getting out a number of casualties. He showed great coolness and courage and his service was of the highest possible order.

He was awarded the Meritorious Service Medal for his valuable services in France. He was promoted to the rank of Sergeant on April 29th, 1918. Sergeant Flack embarked for England from France on 10th February 1919 and finally arrived back in Canada in March 1919. He was discharged at Montreal Quebec on April 14th, 1919.

Upon Sergeant Flack’s return home from the war he purchased the farm on Lot 3, Concession 5 in West Zorra. He married Leone Barrett on October 18th, 1921 and they raised two daughters on the farm. In 1938 the family moved to Woodstock where Sgt. Flack worked as a postman until he retired. He was a member of the Royal Canadian Legion Branch 55 and also a member and past master of the Oxford Masonic Lodge.  Sgt. Flack died on October 29th, 1966 and is buried in the North Embro Cemetery.