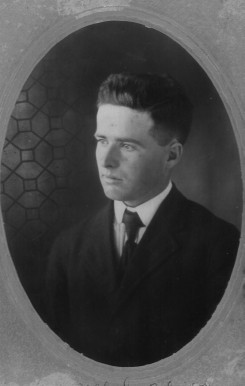 Wilfred Sidney Robinson was the son of Ernest Robinson and Martha Jane Nesbitt of E 1/2 Lot 33 Concession 10. He was drafted in 1918 in the 1st Depot Battalion and received training at Wolseley Barracks in London, Ontario where he was assigned to the Canadian Engineers. He sailed to England on the SS Saturnia and arrived there July 22, 1918. He reported to the 2nd Canadian Engineer Reinforcement Battalion where he was posted to the 3rd Canadian Engineer Reinforcement Battalion for basic engineer training. Following this he was posted to the 3rd Railway Battalion.. He became ill and while on furlough in Scotland he was admitted to 14 Canadian General Hospital at Eastbourne. Despite constant care he failed to improve and died there of pneumonia. He is buried in Seaford Cemetery, East Sussex, England. He is commemorated on the Rannoch Cenotaph as well as the Kintore Cenotaph probably because his father owned land in Blanshard Township as well.

He was survived by his parents, three brothers, Charles, Alvin and William and four sisters, Edna, Queenie Noretta, Ida Elizabeth and Ethel.