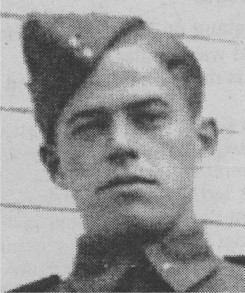 Private Theo McMaster McCready,was the son of Mabel McMaster and Henry Dess McCready of Lot 5 Concession 12 East Nissouri Township. Educated at the Burgessville Public School and Continuation School, he started working at age 16. Theo did not belong to the militia but was called up under the National Resources Mobilization Act on October 9, 1940 for 30 days of training with the Oxford Rifles. On October 27, 1941 Theo was enrolled at London in the Royal Canadian Army Service Corps (RCASC) and assigned to the 4th Canadian Division Petrol Company as a driver. He received his basic training at 10 Basic Training Centre in Kitchener from November 15, 1941 to January 7, 1942. He was then posted to A19 RCASC Advanced Training Centre at Camp Borden where he took a military drivers course from January 7 to April 15 1942. Private McCready was posted to HQ Canadian Artillery Company RCASC in Camp Borden. On June 29, 1942 he arrived in England where he was posted to 81 Artillery Company Workshop RCASC as a driver. On January 22 he was transferred to the RCASC Reinforement Unit where he qualified as a Driver Mechanic "C" and Class 11 Driver Mechanic. On April 2, 1943 he was posted to 14 Canadian Field Ambulance and then on April 28, 1943 he was transferred to 9 Canadian Field Ambulance, then preparing to go to Sicily with the 1st Canadian Division. In early June 1943, the Allied convoys sailed from England to invade Sicily.  There were two convoys: the first, called the Fast Assault Convoy, carried troops and equipment needed for the actual assault on the Sicilian beaches; the second, the  Slow Assault Convoy, carried all those vehicles and equipment needed to  build up the beachhead and support the fighting units forward. McCready was on the latter.  Their ship, the SS Devis, left England in early June 1943 and on July 5, 1943, the ship was in the Mediterranean south of Malta. About 3:45 that day it was struck by a torpedo just below the Men's Mess Deck. Some soldiers were killed or injured while others were trapped below when a ladder burned out. Private McCready was reported missing and presumed killed.  He is commemorated on the Commonwealth War Graves Memorial at Cassino, Frosinone, Italy. -- Courtesy of St. Marys Journal Argus.