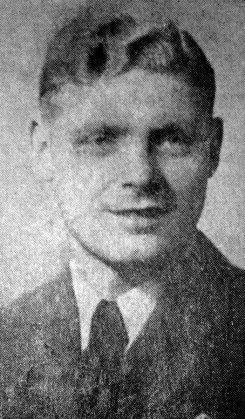 Flying Officer Frank Bishop served with the Royal Air Force and was from Wales. He came to Canada under the Commonwealth Air Training Plan and graduated as a pilot in Calgary. Frank was a transport pilot at Dorval and was then in Nassau where he flew transport aircraft within the American hemisphere as well as to and from Africa and Egypt. He was then posted to the United Kingdom and was killed on February 1, 1945 on the Isle of Mull, Scotland during a blinding snowstorm. His wife, Mabel, and their daughter Frances Evelyn were living with her mother Elizabeth Glover Shrubsole of Lakeside. He is buried in the Cardiff (Western) Cemetery in Wales.