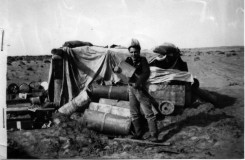 John Beckett served in WW11 as a navigator. While in England he was with Squadron # 55 and in Egypt with Squadron # 14.  He lived in the Egyptian desert from October 1940 until March 1941.  His quarters were a hole in the sand lined with biscuit boxes to keep the sides from caving in.  From  July 7, 1942 until May  8, 1945, John was a prisoner of war (POW).  He lived in nine camps during these three years, being moved in boxcars throughout Egypt, Italy, Austria and Northern Germany.

One box of food per prisoner usually arrived each week but sometimes two prisoners had to share one box as the war raged on.  The Red Cross supplied the boxes which were delivered through Sweden, a neutral country.  While a prisoner in Italy, John Beckett recalled that the guards would take their bayonets and pierce the tins so the contents would not keep which ensured they could not be saved for an escape.

Did you know? Harry James McDermott was killed in action during World War I while serving with the 168th Battalion.… https://t.co/VHqksTwi7b

Did you know? Donald M. Dundas was one of three family members from Vinegar Hill near Embro (with John A. Dundas an… https://t.co/uHJr0ozYxq

Did you know? Frederick McDermott joined the @RoyalAirForce in 1916 at the height of the First World War. Discover… https://t.co/3E37XoPcJy

Did you know? R.A. Duncan of Embro served as a Sergeant during the First World War. Discover more at… https://t.co/Z5yltabSge