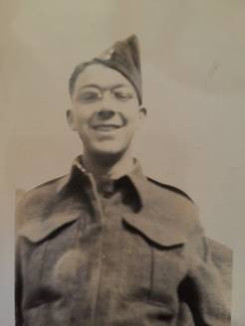 Gordon (Jake) Hutcheson was born in North Oxford on May 3rd, 1921 to James and Mamie (nee Fenton) Hutcheson.  He was the second youngest of seven children and attended Banner School.

Jake enrolled at London, Ontario in the Canadian Army under the National Resources Mobilization Act of 1940.  He served in Canada, the United Kingdom and Continental Europe.  He was discharged on March 16th,1946 "to return to civil life on Demobilization".

He worked at a small cheese factory for a while and then for 30 years at George Hogg & Sons Feed Mill in Thamesford.  In retirement years he went into the shoe repair business by opening a "cobbler shop" in his basement on Delatre Street in Thamesford.

On September 2, 1950 Jake married Marilyn Anne (nee Brown) and together they raised two daughters.  Janis Marie and Lori Ann.  He passed away peacefully at home on March 3rd 1992 and is buried at Banner United Church Cemetery.