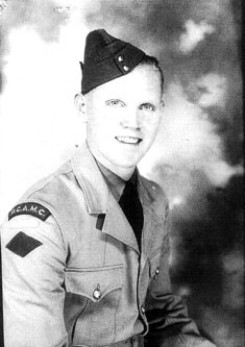 Ralph McIvor (Hank) Baigent joined the Canadian Fusiliers in Vancouver. He was scheduled to be sent to the Aleutian Islands in 1943 but never went. Instead he was a cook for the soldiers in British Columbia. He returned home, and bought a farm in Belmont. He sold this farm in 1955 and bought George Bruce’s farm near Banner. Later he sold the property retaining 25 acres near the river and woods. Ralph then purchased Roy Newman’s farm. After selling the Newman farm, he built a home on the 25 acres which he had kept from the Bruce farm. Ralph married Joan Booth in 1971.